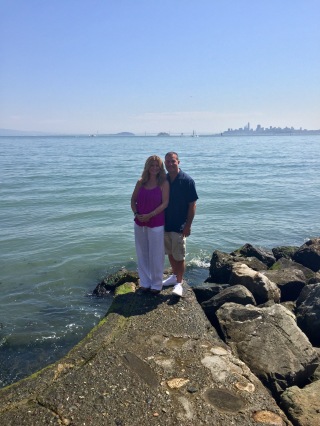 How exciting it was for us to gather our California family and friends together to reveal LBP (Little Baby Pelfini)! To us, the party represented so much after many transitions during our first year of marriage – a true reason to celebrate life! The party was also a week after we celebrated our first anniversary.

Early on the theme presented challenges. I mean where in the world do you find a pink crab? And a blue fish that is NOT Nemo? Thank goodness for the ability to search and buy anywhere! We put months of work into developing the party theme, concepts and purchases, nothing too small to disregard. All things equal blue AND pink. Even down to every other napkin, every other plate!

Meanwhile, on the little one… Earlier that week we received good news, the final hurdles of fetal tests and screens came back all positive and we were moved from the high risk to low risk category. Huge big sigh of relief! Some of this is because of AMA (eeks, Advanced Maternal Age), and some is just general health stuff they were watching. The week after the party we had an echocardiogram and that went well too. Although another visit to the fetal specialist warned against a planned trip to Hawaii for our Babymoon in October (yes it’s a thing), we quickly adjusted our plans to Scottsdale. But getting ahead here, back to the party…

There was one surprise I was not expecting (thank you Michael, the ultimate secret keeper) when my also pregnant-sister Beckey (due 4 weeks after me) shocked me by walking up the porch stairs on the day before the party, completely blowing my mind away. She flew in from Ohio as a total surprise and was the best gift I could have received- Michael agreed. Getting to share pregnancy moments together and some “bump” photos is something we will both always cherish. She also ended up being so instrumental in helping us execute the final setting up and decorating. As usual, the aggressive vision exceeded the timeline to make it all happen. Hey, that’s what marketers do! But working together, we were able to get it all done. In fact, we were feeling good a few minutes before the party even started. Whew!

We didn’t tell anyone what we had planned for the party. I tried my best to be the secret keeper on the details (this is no challenge for Michael). We wanted the element of surprise to be there too, to make it special. Our invitation, “You are Invited to Sea What LBP Will Be…”, included showcasing a pink crab (girl) and blue fish (boy) for a reason. But you’d have to know us really well as to why (no one at the party could guess that either). LBP is an Aquarius baby (if she’s any bit on track for her delivery date early Feb!). Michael is a Pisces and I am a Crab. We both love the ocean and the water. So we figured naturally LBP will love all that too… We turned our home into a fun sea scene, inside and outside of the house.

Surprises to our guest included a full-on wine tasting and charcuterie from our local wine shop, and a taco truck in our front yard! I’ve heard people say it was some of the best Mexican food they have had. We agree!

So many highlights and moments to the party. Michael’s heartwarming speech brought tears to my eyes– also recognizing the love of his mother and her missing presence; our past and present plans for our home with our family; and the eyes and hearts of all at the party. It was quite overwhelming, with around 90 people at our home, but no doubt a day we will love to share with LBP. A lasting memory of the party will land on her nursery wall, as we had our guests write one word they would like LBP to know on a canvas we will have framed… and in the middle of the canvas, her first initial making it a timeless piece.

Ah the good stuff, we revealed we are having a girl! Both Michael and I were surprised. He never guessed and I was pretty much thinking boy. But we’ve been so wrong on guessing genders lately! We also revealed the first initial of her name to be “A”. Yes we have a name picked out. At the party we were still debating our very small shortlist (we had a very shortlist for a boy as well also with A), but we are now talking to her by her name and we can’t wait for you all to meet her soon. Why did we pick “A”? We really like being JaM, which as you know, represents Jennifer and Michael, but now we have a really meaningful “A” that unifies us all as a family. Awwww, right? That’s what we thought.

The main event in February will be the next big reveal… what is her name Baby Girl A? You can guess, but we won’t tell. It’s fun to have a little secret!

Since our love for the water and ocean is something we can both agree on, Baby Girl A’s nursery will be an ocean theme. I’ve been planning and reviewing concepts and ideas with Michael and we’ve started making our first purchases. It’s so exciting! Never a dull moment.

We wanted to especially thank you for all your love and support! LBP/Baby Girl A is one lucky baby. A life filled with love is all you can ask for. We are truly blessed with that and Baby Girl A is feeling the love already. Yep, she’s swimming in her pond, hitting walls occasionally. Uh, I mean kicking and moving around. We think she’s happy. We know we are!

Team JaM thanks the following services that made our party fabulous and we are pleased to support and to recommend:

One thought on “Revealing LBP- she’s our “a” in JaM”